At the last round of Drift Masters European Championship, no other than the co-founder of Formula Drift, Ryan Sage, visited the event. We contacted Ryan to find out what his view were of the event and of European Drifting in general. 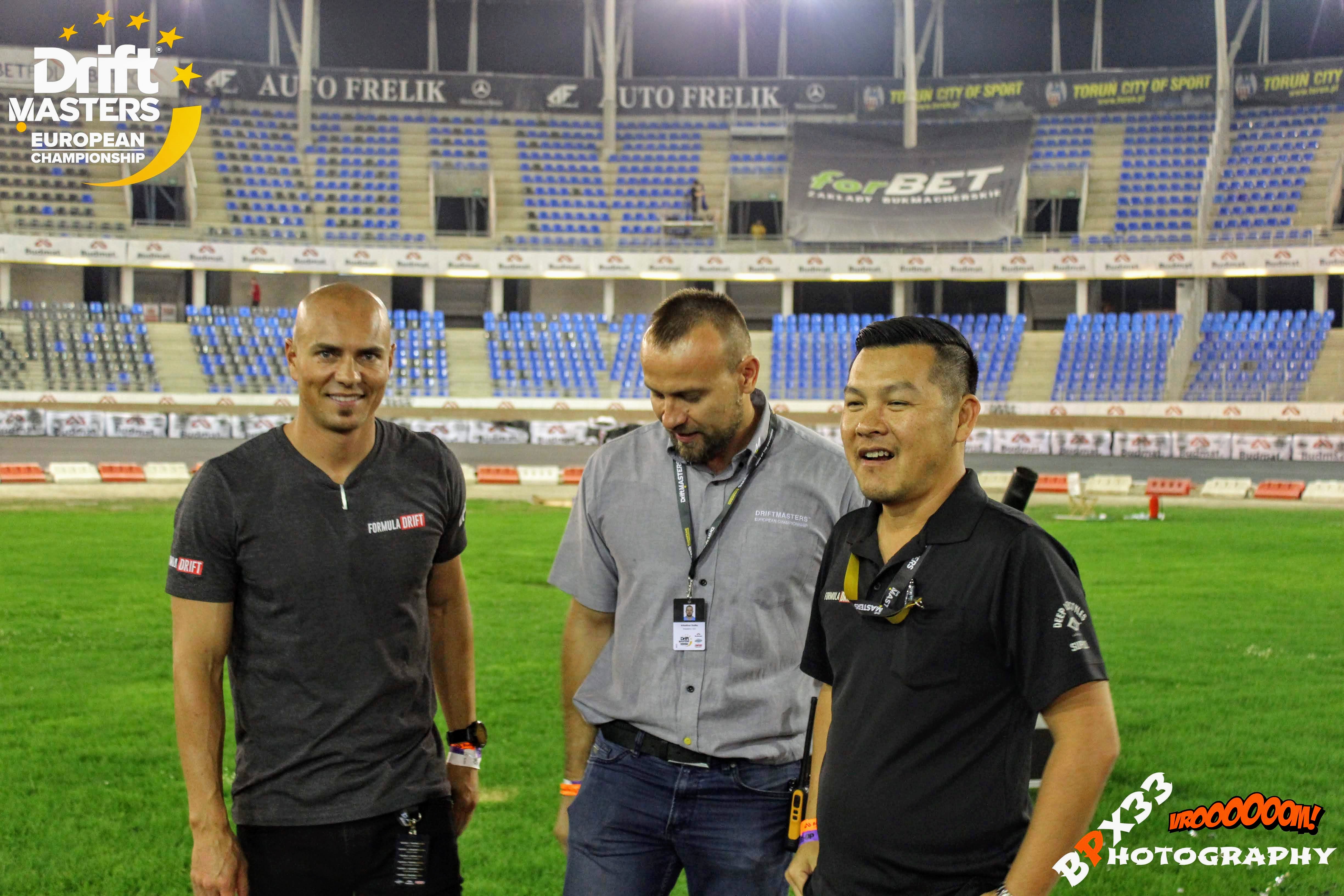 If we start at your own side of the Atlantic ocean, what do you think about the season in FD so far?
-Overall, it has been a great season. It’s been really inspiring to see the teams adjust in the off-season and come out swinging, putting on incredible competitions. The fans have been very supportive this year and we’ve seen incredible crowds, even at new venues, like St. Louis.

You visited Torún in Poland for round 4 of DMEC. Was this your first visit to see European drifting?
-Yes, this was my first visit Europe to see drifting as the central focus.

What is your spontaneous impression of DMEC, the competition in Torún and the series in general?
-It was a really cool experience. The drivers have a really wonderful passion that I found very compelling. The competition was great and the cars were very diverse and unique, which I think, is symbolic of drifting.

DMEC shows a large variation in different tracks. From small, technical tracks in stadiums to big, high speed ones on race tracks. What do you think about that?
-For me, I think that is really important. It’s very similar to our series where when you have these diverse tracks and set-ups, you really get a good idea of who can perform and in what type of conditions. I think it makes the championship more exciting and that, ultimately, is very high on the priority list for a promoter. At least it is for us.

James Deane is in the lead in both FD and DMEC right now. Do you see more drivers from DMEC in FD the coming years?
-I certainly hope so. There have been rumors, and of course, we are directly affiliated with DMEC, IDC and BDC in the region, so there is a mechanism where drivers can come over if they want. I don’t want to spoil the surprise for anyone if they are indeed planning a season in the US, but I do think it’s plausible that we will see more drivers coming over, and we certainly welcome them.

Do you also have your eyes on other European drifting? For example the Nordic series Gatebil Drift Series, where you have Ryan Lanteigne and Brian Eggert as judges. And is that mainly for others to see drifting “the FD way” or is it a way for you to have your eyes on other series aswell?
-Where we can make alliances with similar-minded organizations, we will certainly do that. We are not trying to push any kind of FD-centric ideology, but since we have been around quite some time and in the world’s largest market at the moment, I think some promoters believe that we have some useful knowledge that they can take advantage of. Judging is one of them, but also with car builds and tech.

I think the latter is especially important if we want cars to cross-over more easily. Generally speaking, I think the global drifting community being more or less on the same page is a positive because even though the sport has been around for a while, it still has a ways to go to be recognized and respected in the way we think it should.

Regarding media and spreading FD to drifting fans all over the world, you work with cross publishing on Facebook. DriftZone is one channel where FD is shown now. What is you view on that?
-This is a very important question and one that I have deep interest in. Is the US, FD basically arose in popularity with the rise of social media, so for us, this area is of great importance in reaching and developing new audience. At the same time, there are constant and many changes with how content is being generated and more importantly, distributed. I think it’s an open question as to what is the best way to distribute content at the moment, especially live content. The platforms, the potential partnerships, exclusive, non-exclusive, etc.

In the US, rights are still very important, but the model of FD and most other Series right now are in a very unique position where there is general freedom to distribute across all platforms. That said, that model also comes with some constraints and in thinking about long-term planning and the business model of drifting and FD, it’s important to stay ahead of the curve and try to forecast what will be the best way in the future. There are sooooo many things developing in the content market and a very open and aggressive battle between regular TV and digital, at least in the US, so for us, it’s extremely important to figure out what is going to move the needle and try to plant our flag there. It’s a very interesting and compelling time in the space, to say the least.

And finally, will we see you in Sweden some day?
-I sure hope so!

Many interesting views from a man that really has an overview on the drifting community around the world!

Daniel Brandy Brandner – Will campaign in a S15

Max Heidrich: “Been at the gym and been working on the mental physics”