Formula drift has presented the new judge that will be judging along side of Ryan Lanteigne and Brian Eggert.

Andy Yen has left the trio after many years and now it is revealed that Robie Nishida is his replacement. 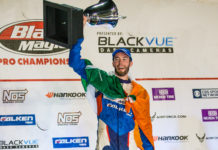