During the our long and cold winter in sweden, we heard some rumors and hints of a very special car being built for top level competition in Formula Drift. The car was built by Napoleon Motorsports and they have a deep heritage of motorsport but, it´s not who are building that is interesting – it´s what are built.

Napoleon Motorsport built the worlds first PRO Drifting Competition car that is all electric – that´s right all electric. When we saw the first set of photos and the hype began to build up then one setback came for round 1. The car was not cleared for racing because the city did not have permission for it. The team and many with them were not happy, but rules are rules and this was nothing that the team nor Formula Drift could do anything about. So Travis Reeder whos is the driver of Camaro EL1 had to compete in the secondary car (a regular competiton drift car).

On to round 2, here it was no problem with permits and the Electric Camaro was given ok to start. So the team got it out on practice and the car showed that it could drift, but the team got some issues during the practice so they decided to take the car out for this round and instead compete with the backup car.

Then this weekend in Atlanta, this was the third attempt for Napoleon Motorsports with their Electric car, had the team sorted out the gremlins from round 2? Well they had sorted it out properly, because not only did it go well in practice, Travis Reeder manage to get the car into the bracket after a solid qualification run. So I guess it´s third time is a charm.

In the bracket Travis Reeder had to battle with Chelsea Denofa, Chelsea had a really strong weekend and was on fire. So he won the battle, but Travis together with Napoleon Motorsports showed the whole world, and the drifting world that their Camaro EL1 do have good muscles and are competitiv.

The car is a 2019 Camaro base, but that´s it. The team rip everything out and build it up again from the ground up, the only bodypanel left untouched is the roof. All other panels are made of lighter materials, the enginebay is now the “Gastank” in wich all the 120 batteries are placed. The engine produce 38 kwh of power, this translates to roughly 515 bhp if we talk normal engine. Some of you may react now and think this is on the lower end, since nearly all FD cars are around 1000 bhp. But the interesting part is the torque, the Camaro EL1 produces 800 newton in torque wich is roughly around the same as the other FD cars, but with a big difference – When Travis Reeder steps on the throttle he has all of those 800 newton to it´s disposal.

We will follow this car closely during the season and see how everything develop from here, but it´s clear that Napoleon Motorsports have written history in Formula Drift. It´s possible to have an all electric competition car in top level drifting. 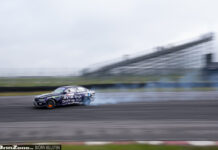